At the AKC National Championship presented by Royal Canin, I asked every professional I spoke to what they wish people knew about dog shows. And some of the answers might surprise you.

There are a lot of things that people think when the subject of dog shows come up. And while one belief many people have revolves around stereotypes, such as those shown in the movie Best in Show, there are definitely aspects of the show you never see unless you actually attend the event.

I had the opportunity to attend the AKC National Championship Dog Show presented by Royal Canin in Orlando, and I admit that it was interesting to see which stereotypes held true and which were overly exaggerated. And one of the things I wanted to do with my trip was find out what the professionals want other people to know about dog shows.

During the show, I had the chance to interview a few different people who were involved in the AKC National Championship. From a dog breeder who was showing a dog to the President of Royal Canin, each person I asked had something different they wished people knew about dog shows.

Up first, is Kamie Eckert, the President and General Manager of Royal Canin. When I asked her what she wished viewers knew about dog shows or even just the AKC National Championship, Eckert said that the thing she “loved the most” is the fact that the AKC National Championship features a meet the breeds portion of the show. Considering this seems to happen as a more behind-the-scenes activity, it is definitely something that more people would probably love to know about.

According to Eckert, “I will tell you the thing I found most startling about being able to participate in this is that there’s over 190 breeds that present in this show, and in the US, certified by the American Kennel Club.”

She also explained that what she this is, “really fun about meet the breeds, is you get to see them and touch them, and my son was here a couple of years ago and got licked by them and all of those things, but it really lets you see like, there are so many unique aspects of those dogs, and it helps you think about what fits with my family if I want to have a pet.”

While speaking to Vicki, a Yorkie Breeder and Handler, who was showing a dog at the show, the answer was perhaps not as surprising as we might have thought. According to her, the thing she wished more people knew was that, “it’s work.” Not only is it work, but it is also “a commitment to the breed.”

For Vicki, this is as much work as it is a way of life. According to her, “you want to breed and show what the standard calls for.” And this is something she “strives to do,” every time she goes into the ring. Plus, while it may seem a bit harsh to people not involved in the dog show world, she also made it clear that she will not walk into the ring with a dog she is “not proud of.” (Honestly, having been to a show, it makes perfect sense, because this really is their job and reputation on the line.) 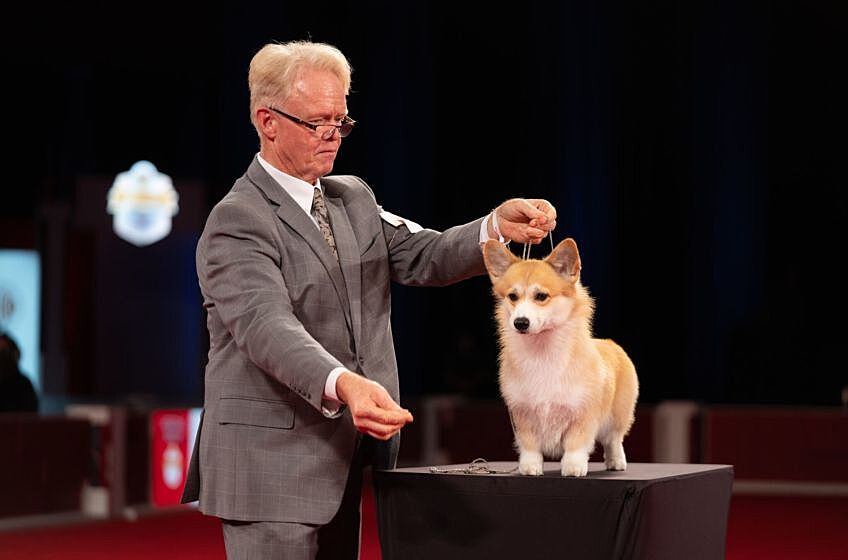 Bill Shelton, a dog show expert, Corgi Breeder, and Judge, also had some interesting things he wished people knew about dog shows. In particular, he reminded us that “dog show people are really the subject experts,” when it comes to their chosen breed of dog. And that makes sense, they have to know every aspect of the dog they show and that includes their history and health information.

Another thing he wanted people to know is, “this just doesn’t randomly happen.” Working with the AKC means dealing with “purposely bred dogs.” Not only is the purpose “about that breed, but it’s also about preservation.

The people who take part in dog shows are typically experts when it comes to their breed of dog, and that is something more people should understand when it comes to these events. All of the people taking part in the AKC National Championship want what is best for all of the dogs that are part of the AKC.

More from Dog of the Day

Finally, we also spoke with Jason Taylor, the AKC National Championship Dog Show Assistant Show Chairman and Royal Canin & Eukanuba National Pro Sales Director about what he wishes more people knew about dog shows. According to Taylor, “I think that there is this misconception that the dogs that come to shows like this, and that you see on television, and win these great awards, that they’re not just regular dogs that like sleep on the couch, probably sometimes pee on the floor, eat the roast off your counter.”

Basically he wants people to remember that they are dogs. And just because they are beautiful dogs who are well-groomed and trained, that doesn’t mean they are not like the dog you have at home. In fact, he said for these dogs it is more like they have “this hobby that they go to for a few weekends a year or maybe a lot of weekends.” And when it comes to the people who do this, they are “dog lovers just like everyone else.” But at the end of the day, these dogs and their people just have a “different hobby” from the rest of us.

Honestly, this might have been one of my favorite questions to ask, because it was interesting to see what the professionals see as something more people should know about dog shows. And while the AKC National Championship might be a bigger than average dog show, it really is all about these dogs and the people who love them.

Related Story: AKC National Championship: What to know about this dog show

Are you surprised by what professionals in the dog show world want you to know? Are these things you already knew? Tell us what you think in the comments.